Aim of the campaign

To strengthen and defend the Irish language in our education system and to ensure that every student can have a positive, meaningful and fulfilling Irish language learning experience from preschool to third level

Objectives of the campaign

Why should Irish be kept as a core Leaving Certificate subject?

Why would students not choose Irish if Irish was optional for the Leaving Certificate?

“We could make it optional for Leaving Certificate; and after a few years we might come to think that it should be optional for Junior Certificate too; and after that – well, what’s the point of bothering with compulsory Irish at primary level, if it’s going to be taken only by a tiny minority at second level? If we follow this path, we may well find that by the end of this decade Ireland has sold its linguistic birthright and staked its entire future – cultural, political, economic – on the continuing international dominance of English. On the other hand, we can respond by taking seriously the linguistic challenge of the European project; recognizing that Irish belongs not just to Ireland’s but to Europe’s linguistic heritage; taking note of the empirical fact that the more languages you learn, the easier it becomes; insisting that Ireland’s membership of Europe requires us to make foreign language learning a compulsory part of schooling; and seeking ways of achieving more effective learning outcomes. This kind of response requires political commitment and a coherent national effort leading to a language education policy capable of generating an integrated language curriculum that in turn can facilitate pedagogical reform.”

From Compulsion to Choice in the Civil Service – Spelling Disaster for the Language:

When the necessity to have Irish to get a job in the civil service was removed as an entry requirement in 1974, the number of staff in a position to provide services in Irish fell drastically throughout the entire civil service. For example, a mere 1.5% of staff in the Department of Education and Skills are now competent enough to provide services through Irish today. This fact contradicts the theory that the use of Irish in the civil service would flourish if an end was put to the compulsion to have the language, as purported by Fine Gael in 1974:

“The government is fully confident that this policy change, which promotes encouragement instead of compulsion, will result in increased goodwill towards the Irish language and will help to widen language use inside and outside the Civil Service.”

Indeed, Conor Cruise O’Brien – who was a Minister in the same Government – admitted that he regretted that such a decision had been made:

“…I would say that without a doubt Irish was reduced in status. Therefore, in retrospect, I do not believe we did the right thing. And I am very sorry about it.”

Why do we think the new system for exemptions from learning Irish is not satisfactory:

The policy would include Irish in the education system at all levels and in all sectors, with the following three core policies included in the policy:

There has never been a policy for the Irish language in the education system from pre-school to third level since the foundation of the State in the south.

Why is there a need for such a policy?

What are we calling on the Minister of Education and Skills to do?

We are calling on the Minister for Education and Skills, Joe McHugh, TD, to continue his support for Irish as a core leaving certificate subject and to develop a comprehensive Policy for Irish in the Education System from Pre-School to Third Level within 6 months. A consultation process should be undertaken immediately to develop the policy and, as was done with the development of the Gaeltacht Education Policy, the consultation should include submissions from the public, public meetings, stakeholder meetings, etc.

Nasc linn | Link with us 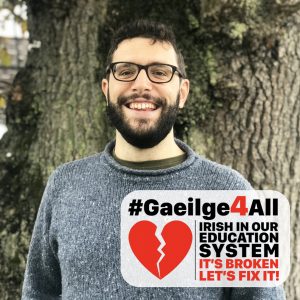